Notes from our meeting with Italian MP’s in Rome

REPORT OF MEETINGS
Members of British in Italy had a series of meetings in Rome on Thursday 18th October.

These meetings included a visit to the Presidenza del Consiglio dei Ministri at Largo Chigi with Pierluigi D’Elia of the Diplomatic council of the Presidente del Consiglio who is assigned to relations with Italy/UK and Brexit, and Marco Peronaci of the Ministero degli Affari Esteri, recently appointed as their coordinator for Brexit under the new Foreign Secretary of the M5S/Lega government Enzo Moavero.British in Italy members were Jeremy Morgan, Delia Dumaresq, Patricia Clough and Charlotte Oliver. We were also joined by Dimitri Scarlato, an Italian living in the UK who is also a key figure in the3million.

We listened to details of how the Italian government is focusing on “preparedness” for Brexit, the main concern being to finalise the Withdrawal Agreement, which is complete, with the exception of the Irish border question, and if this is not possible working on “scoping”, “contingency” in the case of no agreement.

We were assured that the Italian government will do everything possible to protect citizens’ rights even in the case of no deal. This is partly influenced by the fact that Italians are the second biggest group of EU nationals living in the UK (after the Polish).

Will we need to apply for settled status?

We were told that an announcement from the Ministero dell’Interno is expected very shortly to deal with the system Italy proposes for the registration of British nationals. In fact, we have been aware for months that each EU member state has been deciding which of the two systems offered under the draft Withdrawal agreement they would opt for:  a new system under which we would all have to apply afresh for a right to reside here OR a continuation of the present system under which we are already registered.

Applying for Citizenship We raised the uncertainties over applications made by UK citizens for Italian citizenship, particularly in the light of the Decreto Salvini which has increased the length of time Italy can take to decide such applications. An announcement will apparently be made about this in the near future.

We made representations about our need for freedom of movement for all UK nationals in the EU to be included in the Withdrawal Agreement, as well as the life-long right of return to the UK of EU nationals who are granted settled status.

We discussed what needs to be done about citizens’ rights if, as seems very possible, the EU and the UK cannot agree an overall deal or if the Westminster Parliament rejects one. We emphasised our concern that the section on citizens rights in the Withdrawal Agreement must be ring-fenced, as if no deal is agreed with the UK we have no guarantee of citizens’ rights. We also stressed that there are only 5 months left for this to be done. This is a point that still needs to be pushed strongly. The officials we met with would not be drawn on what they proposed to do in the case of no deal, saying that they were concentrating at the moment on making an agreement. We are intending to continue to make representations on this as the negotiations continue without an end in sight.

Visa free travel?The only clear indication we had on freedom of travel was that British nationals with a EU residence document would be able to use this to travel throughout the Schengen area visa free, although not have the attached rights to live or work freely there.

Pierluigi Delia quoted the Presidente del Consiglio Conte who has recently said of the Withdrawal Agreement: “Any agreement must protect citizens above all the most vulnerable”.

We will report further as soon any announcement is released.

Delia, Dimitri, Patricia and Jeremy also had a very useful series of meetings with politicians at Montecitorio and the Senate. We met Elisa Siragusa, a Cinque Stelle deputy, together with two of her M5S colleagues in the Camera. Elisa is M5S portavoce on the Commissione per gli Affari Esteri. We also met Massimo Ungaro a PD deputy and Raffaele Fantetti, a Forza Italia senator. Elisa, Massimo and Raffaele were all elected to represent Italians resident in Europe, and all three happen to live in London, so they have a pretty good appreciation of our concerns and, despite their party differences, often work together on matters of common interest.

We raised with them in particular:

• what would happen to us in the event of No Deal, where we asked them to press for ring-fencing the existing agreement on citizens’ rights;
• the difficulties created by the Decreto Salvini for British nationals who had already applied for citizenship, where we asked them to seek an amendment to the decreto which is in the Senate at the moment so that it does not apply retrospectively.
This was a good start to establishing relations with those in the new Parliament and we agreed to keep in contact over the critical next few months. 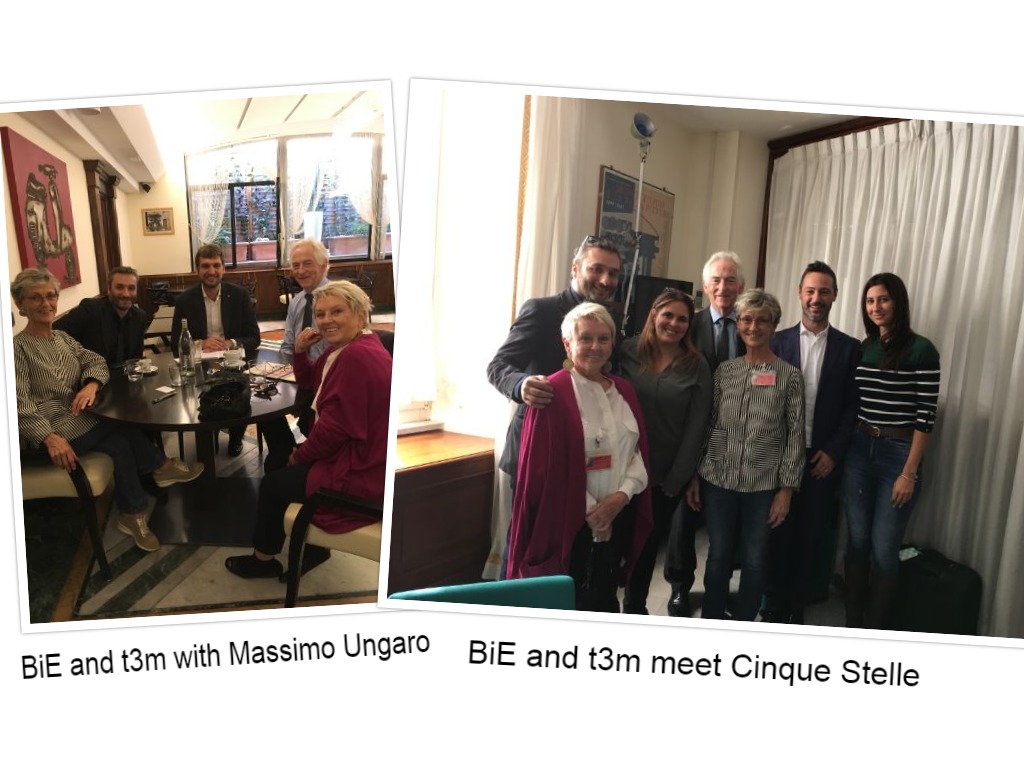